“Charting the Course: A National Policy Summit on the Future of Women’s Health” drew a full-capacity crowd in Boston on March 3, 2014. Organized by the Mary Horrigan Connors Center for Women’s Health and Gender Biology at Brigham and Women’s Hospital (BWH), the summit commemorated the 20th anniversary of the National Institutes of Health (NIH) Revitalization Act while shining a light on disparities that still exist in health equity.

Before 1993, less than five percent of clinical research trials in the U.S. represented women, leading to medical treatments based almost entirely on research and results from male subjects. That year, the NIH Revitalization Act required all NIH-funded biomedical research to include women and minorities. While progress has been made over the past 20 years, “we’re far from achieving equality in research across the continuum,” said Paula Johnson, MD, MPH, executive director of the Connors Center. Johnson urged attendees, “It’s time for a recommitment to women’s health.”

Jack Connors, a staunch BWH supporter whose gift established the Connors Center in honor of his mother, welcomed guests. “Today is an example of the power of philanthropy,” he said. “We need to make a greater investment to achieve greater parity.”

Betsy Nabel, MD, president of Brigham and Women’s Hospital, asked all attendees to get involved. “This issue is urgent,” she said. “To make progress, we need partners.”

One such passionate partner is U.S. Senator Elizabeth Warren, who is pushing for more federal medical research funding. In her keynote address, Warren offered up concrete ideas for change. For one, “the number of women in clinical trials should reflect the proportion of women affected by the disease,” she said. The same should be true for pre-clinical animal studies, she noted. “Only 38 percent of stroke and 45 percent of anxiety and depression studies used any female animals,” she explained. “This should change.”

A key part of the change is building awareness of the gender disparities that still exist in biomedical research. As Connie Morella, former U.S. Representative for Maryland, said, “I believe deeply in the multiplication effect. If each of the 300 people here talks to 10 people, imagine what effect it can have. My message is it doesn’t stop here.”

Even when women and female animal models are represented in studies, the results do not necessarily draw comparisons between the two genders, which can lead to the same treatment plans and medications for men and women. Panel moderators Tom Ashbrook, host of “On Point” for National Public Radio affiliate WBUR, and Lesley Stahl, CBS news correspondent for “60 Minutes,” examined this and other key issues with a critical eye. 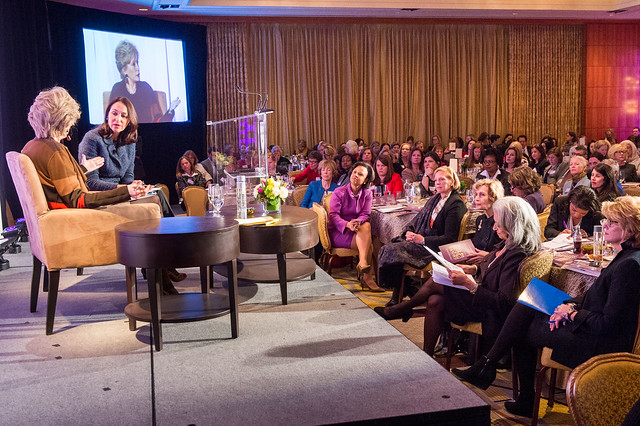 Ashbrook pointed to inequities outlined in the Connors Center’s recent report, “Sex-Specific Medical Research,” and pressed for explanations and solutions from a panel of scientists representing industry, medical journals, and government. Ashbrook noted, “Twenty years later, lab rats [in pre-clincial studies] are overwhelmingly male. How can this still be happening?”

Responses to Ashbrook’s probing questions varied, but all the panelists agreed an integrated approach across government, academic medicine, and industry is necessary to move ahead and provide accountability.

Following up on her recent “60 Minutes” report, “Sex Matters: Drugs Can Affect Sexes Differently,” Stahl led a discussion on the path forward. Panelist Victoria Reggie Kennedy, president and co-founder of the Edward M. Kennedy Institute for the U.S. Senate, argued one need “is a robust post-market surveillance of drugs.” Another is to teach medical students about sex differences in research. “It’s a gaping hole, and medical education needs to fill that hole,” Kennedy said.

Putting the need for improved medical education into perspective, Stahl frankly stated, “If I were in med school today, I would still not be taught about sex differences.”

The event concluded with two videos highlighting achievements of the past 20 years and what comes next. In her own pre-recorded message, U.S. Senator Barbara Mikulski, who was instrumental in the development of the 1993 act, noted, “Each and every one of us can make a difference when we work together. May the force continue to be with us!”

Visit the Connors Center website to get the latest news on this important work.