The Creation of a New Stepping Strong Trauma Center

On January 7, 2016, clinicians, researchers, and supporters gathered for a meeting of the Stepping Strong Innovator Awards Council. But the awards were not the only topic of conversation. After Brigham and Women’s Hospital President Betsy Nabel, MD, welcomed council members, she made a special announcement: the creation of a new Stepping Strong Trauma Center, which will open in September 2016 in the new Brigham Building for the Future.

“The time is right to expand the Stepping Strong program from a virtual catalyst for change into a physical hub, anchoring a sustainable network and extending well beyond Boston—an expansion that will bring the fund’s work to the next level and position the Brigham as the national leader in trauma research and care," said Dr. Nabel.

The goal of the Stepping Strong Center will be to rapidly translate laboratory discoveries directly to treatments for patients here at the Brigham, and, through multidisciplinary collaboration, advance and accelerate promising trauma research and clinical care aimed at improving outcomes for millions of trauma patients and families around the world.

A multidisciplinary trauma center has been a goal of the Reny family’s since the fund was established in February 2014. “I am so excited about the vision for the Stepping Strong Trauma Center, which really captures exactly what my family and I had hoped for at the start of this journey,” said Stepping Strong Ambassador and marathon bombing survivor Gillian Reny. Mitchel B. Harris, MD, will lead the center and serve as the inaugural Stepping Strong Distinguished Chair in Orthopedic Surgery. 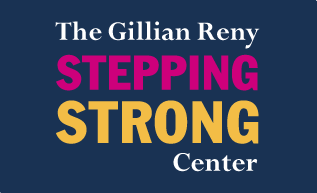