On Wednesday, January 25, more than 180 people gathered in BWH’s new Building for Transformative Medicine to celebrate the official opening of The Gillian Reny Stepping Strong Center for Trauma Innovation. Named for Gillian Reny, who was gravely injured in the 2013 Boston Marathon bombings, the center is dedicated to collaborative efforts in advancing trauma research and recovery.

BWH President Betsy Nabel, MD, opened the program, acknowledging Gillian’s indomitable spirit: “You are the inspiration for our greatest Stepping Strong milestone to date—the opening of our new center, which will allow us to help more patients like you pursue their dreams to step strong once again.”

Next up was center director Mitchel B. Harris, MD, who spoke passionately about his commitment to accelerating innovation in trauma care through interdisciplinary collaborations. Harris was part of a multidisciplinary team that treated Gillian and the 38 other injured patients who came through BWH’s doors that day.

Gillian’s mother Audrey Reny Epstein, thanked everyone for their partnership and support. “When we first launched Stepping Strong, we did not know if anyone would join us in our mission or share our passion,” she said. “But we now have nearly 13,000 supporters around the globe.”

As the program continued, Matthew J. Carty, MD, director of BWH’s Lower Limb Extremity Program and winner of the inaugural Stepping Strong Innovator Award, discussed how Stepping Strong funding enabled him to develop and perform a first-of-its-kind amputation procedure on Jim Ewing, who was in attendance at the event. The procedure will allow Ewing to control and interact with a new prosthesis like a natural limb.

Before the Reny and Epstein families joined Nabel onstage for the ribbon cutting, Gillian presented the inaugural Stepping Strong Hero Award to John Mackie, a former soldier in the U.S. Army infantry who was on the scene as a spectator at the 2013 Boston Marathon and who quickly responded to Gillian and her family at the scene. The award recognizes extraordinary and selfless acts of courage by everyday citizens.

Enjoy a gallery of event photos 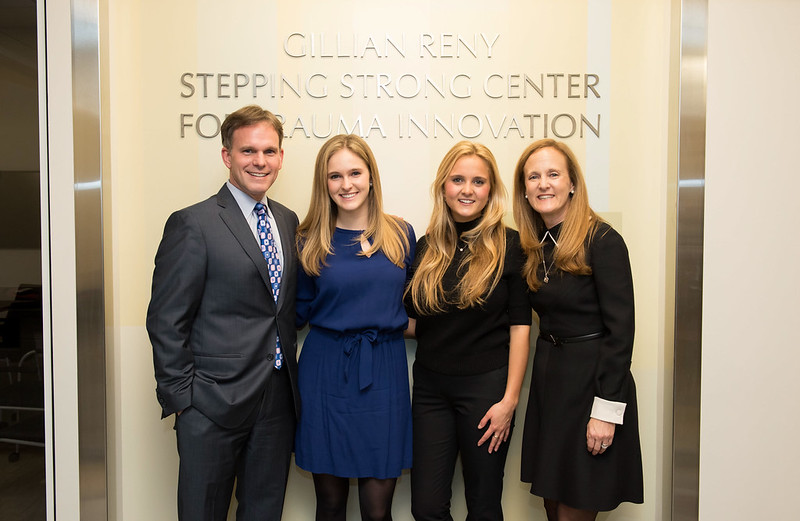